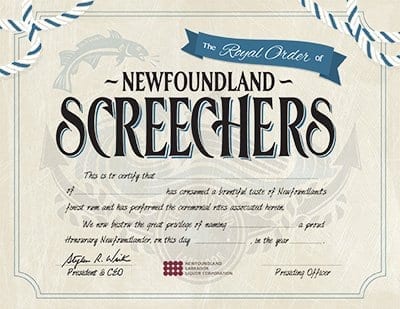 Want to get Screeched In ? ? Or maybe you’re just wondering what the heck being Screeched In means? Before we answer that question, let’s start by understanding what Screech is and where it comes from.

Screech is a rum that’s popular in Newfoundland and can be found everywhere. Historically, Screech was a Demerara rum made in Guyana, South America. Why from Guyana? Newfoundlanders would export their Salt Cod to the British West Indies where it was used to help feed slaves in the America and the Caribbean, and in exchange, they would get rum in return (money was virtually non-existent in Newfoundland as recently as 70 years ago). Barter was the main way of exchanging goods and services.

Today, Newfoundland Screech rum can be found all over Newfoundland and Labrador. Although there is now a Screech brand of rum, the term Screech is a common term that is used to describe anything with high alcohol content (and cheap) 40%+ alcohol (including moonshine). In other words, it’s strong booze.

So what’s it mean to be Screeched in? The process of being Screeched In is an optional ritual can only be performed on someone who is not born in Newfoundland (so if you were born in Newfoundland, you’re not allowed to participate). Non-Newfoundlanders are also lovingly referred to as “mainlanders” and “come from aways/CFAs”, which is a broad spectrum term for anyone who wasn’t born in the Province.

The ritual is performed differently in certain regions, but the most widely accepted: involves the subject drinking a shot of screech (straight, not mixed), reciting a few words, and kissing a real codfish on the lips. Often times, after being screeched in, the participant received an official certificate showing they are now an official Newfoundlander.

Still want to get Screeched in but don’t know where to go? Don’t worry, getting Screeched in is a lot easier than avoiding the process. If you’re out having a drink with locals and they find out you’re a come-from-away that’s never been Screeched in, you probably will be before the night is through. Same goes for pretty much anywhere you go – people’s homes, pubs on George Street, and even our neighbor house. If you’r looking for a full on Screech in experience that’s guaranteed to please, plan a Screech in night at one of the old time pubs like Trapper John’s and Christian’s on George street, or take a trip to our favorite local restaurant the Captain’s Table.

The actual process of the Screech In ritual will vary slightly from place to place. The words recited are often different depending on where you go, and even Cod fish is sometimes substituted for a mackerel or whatever else is in the fridge at the time. The intent and context, however is always the same; to make you feel at home, welcomed, and accepted – something that everyone appreciates, no matter who you are.

Travel to Newfoundland During Atlantic Bubble

Everything you need to know about Atlantic Bubble 2.0