When photographer Erin Lindsay visited Newfoundland for the very first time, she was in absolute shock. “This place is a photographer’s paradise” was all she could keep saying.

As a professional photographer that has traveled all over the world, when Erin wants to get great photos at a travel destination, she grabs her camera, heads outdoors, and does what she does best. Erin Lindsey, founder of the travel site Escape Brooklyn, has a list of things she looks for. “I’m on the hunt for any body of water, dramatic terrain, deep forest, picturesque towns, dirt roads, historical sites, wildlife, moody weather, colorful sunsets, or thick fog,” she explains.

“The area in and around the Newfoundland’s capital city of St. John’s has all of that”, said Lindsey during a recent trip to the island Province in Canada “I literally never set my camera down, except to sleep,” she says. Here’s where she went.

“I literally never set my camera down, except to sleep”

Signal Hill and Cabot Tower is a high lookout point that sits on the far eastern edge of Newfoundland. Located in the capital city, and close to downtown St. John’s, Signal Hill and Cabot Tower is a favorite area for locals and anyone visiting St. John’s to explore. Once the scene of a colonial-era battle and later the site of the first transatlantic wireless broadcast, this area is full of history and natural beauty. As a National Historic Site and pending World UNESCO Site, the top of Signal Hill is where Cabot Tower sits perched perfectly on it’s apex, just a 4 minute drive from downtown. There are also hiking trails and cycling paths that can take you to the top, a great adventure for any morning or afternoon. The outer battery trail, with it’s steep sea cliffs and walk through the outer battery is the highlight of any hike to Cabot Tower. “Signal Hill is a great first place to visit, as you get a real sense of the city from the hill—but also because of the stunning scenery and land formations,” Lindsay reports. “One minute you’re looking down over this little seaside town, and the next you’ll swear you’re in another hemisphere altogether.”

Cape Spear, the most easterly point in North America, was equally as attractive to Lindsay. Keen to get outstanding coastal photos, Lindsey made the 15-minute drive to Cape Spear on three separate occasions during her photography vacation to Newfoundland. “It’s such an incredibly beautiful place, and each time, the landscape felt dramatically different,” she says. “When it was clear, Cape Spear felt like a painting, with tall grass blowing in the wind around a big, beautiful lighthouse. But my first trip out, it was a total wall of fog. It did feel a little eerie, but I loved having it all to myself. Adding to that, I could hear the ocean, but I couldn’t see it—the cliffs just kind of disappeared into the sea of fog. It was incredible.”

“It’s such an incredibly beautiful place, and each time, the landscape felt dramatically different,”

Just when she thought St. John’s couldn’t get more photogenic, Lindsay fell in love with the historic homes in downtown St. John’s that are painted in an array of vibrant colors. “Taking photos in downtown St. John’s is outstanding for social media” said Lindsay “It’s very distinctive—I loved it. All the color combinations and the way the light hits the houses at different points of the day made for some fun scouting and photography,” says Lindsey, who also liked the sense of community spirit. “It’s so cool when an entire town picks a ‘thing,’ and literally everyone goes in on it.”

It’s no accident the houses in downtown St. John’s look the way they do. As the oldest city in North America, St. John’s has rules about what colors you can paint your house and what any external renovation in the downtown core looks like. The City of St. John’s works hard to preserve the city’s historic feel and beauty.

Leaving the capital city’s downtown core, Lindsay embarked on the popular Irish Loop drive, a classic route around the Avalon Peninsula that clocks in at 321 kilometers (that’s 200 miles). Sampling a small piece of it, Lindsey realized she’d probably need a couple days to do it right. “My definition of a good driving tour for photos? Pulling over to the side of the road every five minutes for photos, which I totally did on the Irish Loop,” she says. “Places like the Witless Bay Marine Ecological reserve and the East Coast Trail pathways were the highlight. With whales, seabirds, and natural beauty all around, it’s hard not to find something you want to photograph.” It’s true, the Witless Bay Ecological Reserve has lots to see. Humpback Whales come to the area to feed in Mobile Bay all summer long and it’s a top destination for spotting rare seabirds and marine mammals.

“There are so many epic photo-ops: winding roads, wildlife, rivers, lakes, mountains, cliffs, islands, lighthouses, kooky souvenir shops—you name it. My advice for fellow photographers doing the loop: Bring a picnic, an extra camera battery, and if you’re traveling with someone else, make sure they’re really patient.”

There’s abundant wildlife on the coast around St. John’s, and boat tours to the Witless Bay Ecological Reserve bring you within easy camera range. “The boat tour was one of my favorite parts of this trip! I’ve wanted to go whale watching for as long as I can remember,” Lindsey says. “We didn’t just see one or two, either.” Lindsay joined a boat tour in the Witless Bay Marine Ecological Reserve, departing from Bay Bulls Newfoundland and exploring the areas of Witless Bay, Mobile, and the highlight, Great Island. There are a multitude of boat tour operators in the Witless Bay Marine Eco Reserve zone, everything from small boats that specialize in taking small groups to larges super boats that can take dozens of passengers at a time.

It would be a mistake to think St. John’s Newfoundland is in the middle of nowhere. The Capital City and St. John’s International Airport is actually in the middle of everywhere, strategically located between Boston, New York, Europe, and Toronto. St. John’s International Airport, YYT, is an easy place to fly in and out of, with a great mix of domestic and international connections to choose from. With St. John’s being such an easy flight from her home in New York, Lindsey was able to do this trip the way she likes best: with minimal planning. “I purposely don’t over-research a place before I go there, because the feeling of ‘discovering’ something is a total addiction for me,” she explains. “In and around St. John’s, I was absolutely feeling that. And because of the crazy landscapes, I felt a world away from New York. It was like no other place, anywhere.” 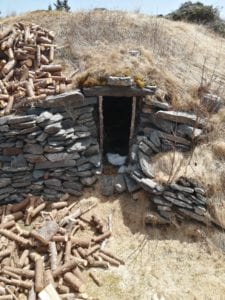